Go to Skullduggery Island, if you’re not already there. Go on top of the bridge, and go right. Now, after you go right, make yourself down, under the boulders. You should be directly under the bridge.

See the Go Left sign? I underlined it. So, go left. 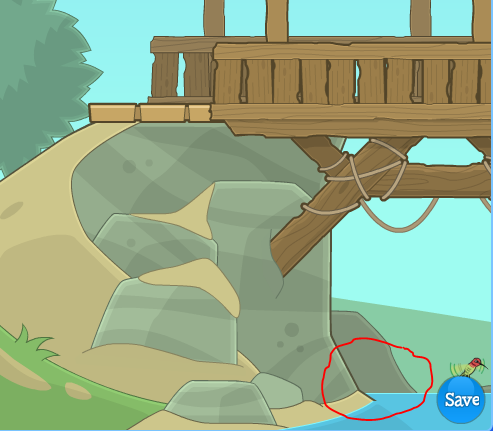 Where my gorgeous red circle is, there should be a Doubloon. Get it, and go back right. Now, do your amazing Poptropican sommersaults, and go to the governors house. Talk to him. Now you can go back left, to Fort Ridley’s Main Street. Find Stinky Tim’s General Store, and go inside. There will be a shelf with out of stock items. Click on the shiny mirror. You will get it for free.

Now use your Doubloon, and trade it for a bag of feed. Leave the store. Take the feed to the guy who can’t afford to feed his chickens.

:O I’m taller than him! He will give you a chicken in gratitude. Take it to this guy, whose crops are dying: 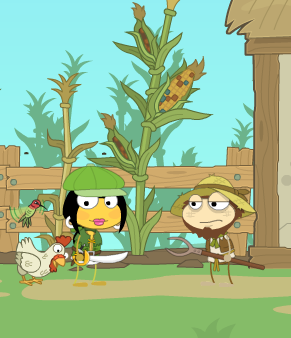 After you give him the chicken, he will present you with a bluish candle. Go to the governor’s house and use it. It will reveal a new documennt. He will tell you that you can find a new map piece and that you get rid of Crawfish. Go out of the house and left, to the tower.

Use the telescope, and signal to a small raft. A short cutscene will happen. And then, congratulations! You have your own raft!

Now that you have a raft, you need a better ship! The easiest way to get money is this way:

If you keep going in a circle like this, you will eventually have a lot of Doubloons. Whenever possible, go to Dragon Cove to get a bigger and better ship. Eventually, you’ll get a Phoenix Warbird. It looks like this:

Then, after defeating some ships and collecting salvage*, you haveta get the map pieces.

At Bouffant Bay: Go to the little hanging ferns, and knock them in this order: 3-2-1. A map piece will float down Get it.

At Parrot Port: Go inside Petey’s Pirate Pub, Get the cracker here:

Now go outside. Find a red parrot, and talk to it. Then, jump in the sea, and go to a house window. Now, after talking to it, clog the vent. If you did it right, the parrot should be on top of the palm tree. Talk to it. It will tell you to go to the tower, so do that. Use the cracker, and the parrot will come. Talk to the pirate, amd he will give you a map piece.

See that? Well, from right to left, click the fourth, second, and first. A little paper will come out. The map piece.

Go climbing to the top of the outpost. You’ll find a Cannon Starter Kit. Get it, and then shoot the lower cannon so that it gets the Gold tooth in the pirate’s mouth.

Go on the Dragon’s Head and sit on it. Then, the Dragon will sink, and you’ll get a Mallet. Use it, and you will push the old man to the front of the bell. Then you’ll ring it, and fish will come out. You’ll get a map piece. Now, since you got all the map pieces, use them. Skullduggery Island! Sail to Fort Ridley Island to talk to the Mayor. He’ll give you what you need to find the treassure. So go close to Skullduggery Island, and Captain Crawfish will be there. Just shoot nonspot at him, until you beat him. Now, land on Skullduggery Island, take six steps, and dig. Then Captain Crawfish will appear. Your crew will beat him, he’ll stay, and you’ll get your Medallion! 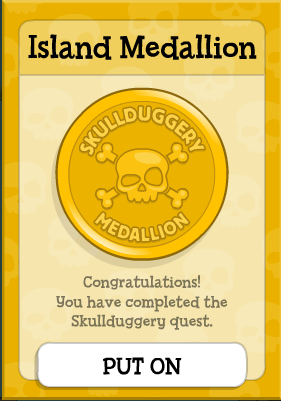