Glitches are awesome to discover!  Here are some:

Standing on air
Credit 2 -GhostGirl-
On Counterfeit, when you are untied, go under the light and jump. You are standing on air!

Randomizing You hair and skin (Credit to fLyInGmAnGoZ)
To do hair, do ctrl+shift+h
It might show internet history but keep trying.
To do skin, just do ctrl+shift+s
Ta-da!

Going on 2 islands at one time!!

She’s too lazy to get up and drink water, if she’s so dehydrated, GET UP AND GET IT, Jumper!! 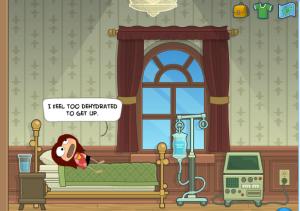 Pretty Lazy!! Good thing Mews Rescued her. It’s in members only status and I’m a non-member!!

If you think she’s wierd, she just wants to have fun!! She’s definitely into parties!! 😀 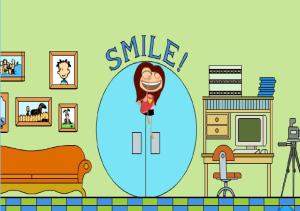 she knew that woman was talking about her!!

See? I happened to log into Poptropica, and I can see more than the allowed screen!

Free Membeship?
Credit 2 fLyInGmAnGoZ
If u have a member account, do this:
First log out.
Click back.
You will have a poptropican, boy or girl.
The name will be UNKNOWN UNKNOWN or a random one.
You will be on a early acess island.

Me (left) and Friendly Axe (right). Please note the number of stars on the star thing.

I have a glitch for ya guys: when i go to stats and store, it shows my game star rank to be 5 stars, but when I go into a multiverse room, my star ranking is 4 stars! Did you see anything like this in your account?

Brave Tomato (again): Ok, here is something else weird. You know how, in Mythology Island, you have to make the aqueduct flow for the sphinx? Well, right after I pushed a bridge, I ran like I would do across a bridge, and this is what I got:

At one point, it’s almost like I was standing on air. 😐

The Fiona/Valiant Glitch by Brave Tomato

There’s something strange… in Ghost Story Island. I mean, it’s a cutscene glitch at the very end of the Ghost Story quest, where Fiona is revealed to be a ghost and stuff. The cutscene goes along fine until Fiona shows up. And it seems like she’s a little excited for it.

Fiona? That’s not your smile. It has lips, not that cheesy… thing. The weirdness continues when Fiona walks over to Valiant. Her mouth is still moving, although she isn’t saying anything!

I’ve already alerted this “erratic character behavior” to the report a bug thing two month ago. A woman named Cara, who works at customer service, probably, sent me an email wanting more details. I replied to her giving more details and the above screenshots. She was able to understand better and said that she was going to send the issue to the developers. As of July 2012, it’s been a month now, and it’s getting kinda annoying. I’ll just have to be patient.