Yep, getting ready for holiday break (and Thanksgiving)? Well, here’s a post that will make you say “I just had a wonderful Poptropica Update Thanksgiving” as this post has a sprinkle of BTS (Behind the Scenes)!

Poptropica’s Cryptids is in for a Throwback Tuesday (or Thursday for most)! It seems like the Creators have an idea for a TBT: The cryptids in kindergarten.

A delay with Arabian Nights Island

I recently was on Poptropica’s Twitter and I saw this:

Sorry members, but Arabian Nights Island (Episode 2) isn’t going to be an early access today. Instead, it’s pushed to two more weeks, releasing for members on December 11th and releasing for everyone on December 30th. Sorry for the sad news, members! 😦

On the Arabian Nights Tour page, info about the second episode is now out! The episode is called Lair of Thieves.

Here is the synopsis:

In the den of the forty thieves, danger lurks around every corner. To outwit the most dangerous thieves in the desert, you’ll need a little help evening the odds – and you’ll find it in the form of an incredible magic power!

Wow, seems cool! So much action; I can’t wait to play it!

Poptropica Comics has come to an end

Yes, so subtitle says it all. Sadly, the Poptropica Comics for this year have come to an end (for 2014 at least), but don’t worry, you can read all of this year’s comics in the Daily Pop on Poptropica. Aaaaaaand… The Poptropica Creators also said that Oliver and Jorge will be back for more adventures in 2015. 🙂 Some BTS of the DP

Speaking of the Daily Pop, I found some cool BTS sneak peeps that hint to upcoming episodes for Arabian Nights, Poptropicon, and even the supposed new island, Galactic Hot Dogs Island. Yep, and once again, there are new ads that just popped on Poptropica:

A Hot Wheels ad for guys,

And a Monster High ad for girls. “This song shrunk me”

Hoped you enjoyed this post! Have a happy Poptropica Thanksgiving!

Hey everyone! The Creators recently tweeted another behind-the-scenes picture relating to Galactic Hot Dogs. The Creators claim that this blueprint for the GHD crew’s Neon Wiener spaceship is “VERY, VERY behind the scenes.” 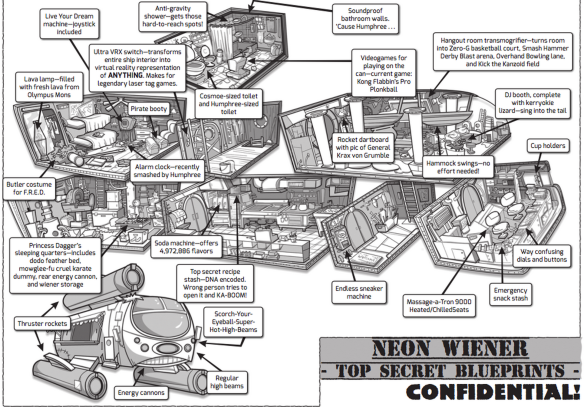 Do we have a new island rising up (totally not a reference to Poptropolis)? The Tweet links to this video trailer for Galactic Hot Dogs.

Yep, getting the feel of a new island coming! The Creators have mentioned that GHD may become an island in the future!

There is another behind the scenes image on Twitter, but this doesn’t reveal as much.

Hey, it’s a Bonus Quest Guide from me, Nameless UnDEFiNed, so let me know if there’s anything I should add, or any bugs I should add a warning for 😉

After you beat Mocktropica Island (Guide HERE), it’s time for the Bonus Quest. If you need help, keep on reading.     Go into HQ, and enter the basement.  Talk to Billy, then into Auto Mode you go. You’ll be told there’s a rogue programmer to chase. Click on the computer you were using as an Island Editor.

Now talk to Bucket Bot, click on the giant computer screen to the right, and follow Bucket Bot into the Arena.

You’ll start with 99.999 Mega Coins, and then you click to start. All you have to do is beat the MFB. Strangely enough, it’s a LOT easier now, than it was before… Just try not to let your energy run out COMPLETELY. CAUTION: Game may freeze at flashing lights. End of Round 1, Match 2. If this happens, you have to log in again.

After you beat Colonel Hertz, you will go into Automatic, and once you return to Poptropica, some more Automatic 😉 😛 Now, get your Bucket Bot costume! You beat the Bonus Quest!

Click on that picture for full size. And I can’t really make my own video because I’m not allowed to upload to YouTube right now (Thanks Mom!), but I found one, thank you Poptropica Creators!

Listen to that music! Wowzers, I love it. The game has lots of glitches, including the Mancala glitch, where you have to switch tabs for the turn so it won’t freeze…  Now, onto the Islands.

There have been 36 Poptropica Islands released in 2013. How many will be released in 2014? I hope more. I started calling this new version of Poptropica, “The Decision”. Because, new players have to decide whether they like this way or not. Older players even have to as well, and I don’t like it. You should be able to make MORE decisions. I’ve heard people around the blogging world complaining, and I thought that maybe we should get the decision between the new and old version of Poptropica. Whether “Bigger and Louder”, or “Small and Quiet”, I’d like to choose! How about you?? Do you want a choice?

I helped HPuterpop find out somethings in the Trash Can of Mocktropica… Why always the garbage? Why can’t we look through something else?!?! Oh well, the Poptropica Universe may never know 😛 Anyways, I was looking through the trash can, and I sorted out all of the pictures that were there, at least the ones that looked important. Here’s the pic:

NOPE!!??!?!?!?!? WHAT DO THEY MEAN BY “NOPE”?!?!? I’ve been waiting on this Island since I started playing Poptropica! Grrrrrr, stinking Creators…

I like the Main Island Character Ideas though… Maybe we were GOING to send a Hot Dog into space, or battle an evil plant with lightning bolts, or keep a beaver from taking all of the wood on “Woodya Wanna” Island… But thankfully the Creators came up with better ideas 😛 And thank you, Tough Spider, for pointing out that since the piece of paper is in the trash can with NOPE written on it, maybe the NOPE part was what’s been thrown out… If that makes sense to you others 😛

Now, you see, I’m not the kind to make long posts, so I’ll have to make another with more things I’ve found 😛 Maybe not…

So, let me say one more thing: Mocktropica was MADE for this glitch 😉

It is officially out and I am doing it. It seems pretty easy for now ( I am going into the factory now.) I might finish this island! They did a pretty nice job, it feels like the old islands. Anyway I got to go!

I’m always the last to know about things.  Like how Roald Dahl day was yesterday.  I didn’t know that until I read the Creators’ post about Roald Dahl.

In their post about this “man behind classic stories”, the Creators announced what the next island was going to be.  I think we all know what that island is going to be.  After all, that’s all BT’s been talking about for a long time. 😉

Today is Roald Dahl Day — the birthday of one of the greatest storytellers of all time! Roald Dahl was the man behind classic stories like James and the Giant Peach, Matilda, The BFG, and a whole lot more, including our favorite, Charlie and the Chocolate Factory

In fact, we love Charlie and the Chocolate Factory so much that we’ve decided to make a whole Island out of it! Consider this our Roald Dahl Day gift to you.

We’ll have a lot more to tell you about our latest and greatest project in the weeks to come!

Well, they said that this island was their greatest project, so, hopefully, that means that this is going to be one awesome island!  I hope we find out more soon!

Super Thunder (@IsabelleAmaya1) is the founder of Super Thunder's Blog. She loves Poptropica and all of the Poptropicans, even though she's currently in trouble and not allowed to go on her laptop.

It's a Poptropica Blog
Blog at WordPress.com.