"You find your faith has been lost and shaken, you take back what's been taken. Get on your knees and dig down deep, you can do what you think is impossible. Keep on believing, don't give in. It'll come and make you whole again. It always will, it always does. Love is unstoppable." -Unstoppable By Rascal Flatts I'm just a teenager who loves music, singing, playing my guitar, dancing, playing on my 3DS, playing Poptropica, and playing Neopets. I work on a few different Poptropica blogs, mainly my blog (Icy Comet's Blog), the PHB, and Super Thunder's Blog. My favorite kind of music would have to be a tie between Contemporary Christian music and Country music. My favorite series of books/movies is The Lord of the Rings (The Hobbit included). My favorite video game would probably have to be Kingdom Hearts: Dream Drop Distance. And I'm a huge fan of the Avatar: The Last Airbender series. So, yeah, that's about all there is to know about me. See ya!

I know, the title’s pretty much hopeless.  Oh well, I wouldn’t be Icy Comet if I wasn’t a master at thinking up bad titles.

There’s a new power-costume-thing in the Poptropica Store!  Right in time for Halloween.  So, if you’re in search of that just-right scary costume, maybe this is the one for you.

There’s a new Gold Card available in the Poptropica Store! With the Skeleton Power, you can turn yourself, and everyone else, into a bag of bones.

Halloween is right around the corner. The Skeleton Power is your key to a spooky holiday!

Here’s a picture of the card.

It costs 75 credits, which is the normal price for a costume.

So, what do you think?  Will you be getting this new gold card for Halloween?

The release of Super Villain Island means only one thing: members gathering up their courage to delve into the dreams of four of the words villains that Poptropica has ever known.  And, of course, there are ten Poptropicans who managed to beat this island before anyone else.

Congratulations to the first 10 finishers of Super Villain Island!

Super Villain Island is now out for Poptropica Members. Once again, we’d like to tip our cap to those players who journeyed to the source of evil just a little bit faster than everybody else. Congratulations to: 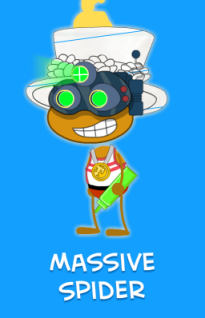 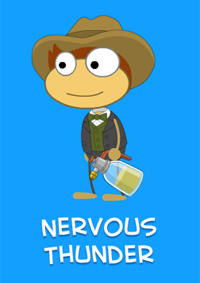 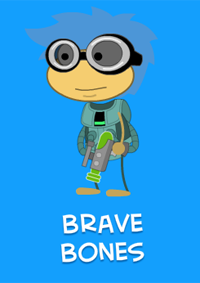 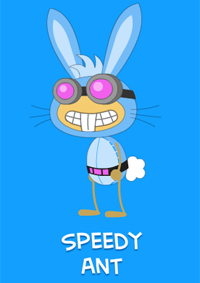 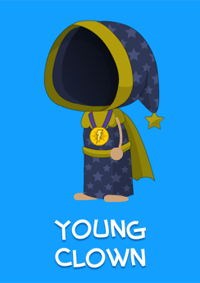 Congratulations to all of you! And to those who have yet to delve into the minds of Poptropica’s most fiendish villains, well, you have a lot to look forward to.

The binary translates into “thunderous applause”.

Congratulations to all of you who made it into this list!  Wish I knew how you managed it. 😉

I’m always the last to know about things.  Like how Roald Dahl day was yesterday.  I didn’t know that until I read the Creators’ post about Roald Dahl.

In their post about this “man behind classic stories”, the Creators announced what the next island was going to be.  I think we all know what that island is going to be.  After all, that’s all BT’s been talking about for a long time. 😉

Today is Roald Dahl Day — the birthday of one of the greatest storytellers of all time! Roald Dahl was the man behind classic stories like James and the Giant Peach, Matilda, The BFG, and a whole lot more, including our favorite, Charlie and the Chocolate Factory

In fact, we love Charlie and the Chocolate Factory so much that we’ve decided to make a whole Island out of it! Consider this our Roald Dahl Day gift to you.

We’ll have a lot more to tell you about our latest and greatest project in the weeks to come!

Well, they said that this island was their greatest project, so, hopefully, that means that this is going to be one awesome island!  I hope we find out more soon!

As you probably know, Lunar Colony was released this past Thursday.  It was pretty good in my opinion.  Not the absolute best ever, but a lot better than some of the more recent islands.

Anyway, since you probably don’t care what I thought about it I’ll just move on with the post.  Just like they always do, the Creators have released a list of the first ten people to finish Lunar Colony.  And, just like always, I’m not on the list…

Congratulations to the first 10 finishers of Lunar Colony!

Poptropica Members are unlocking the secrets of the cosmos in Lunar Colony. These 10 Poptropicans were the first to do it.

Congratulations to you all!

I thought that I was going to make it this time.  I thought that I was going to be one of the first ten finishers.  Everything was going great…until I got stuck after the first few minutes of playing it.  And then when I finally got un-stuck, I got re-stuck a few seconds after.  I don’t know what it was about that island, I just could not do it.  And the thing is, if you do a few things out of order then your basically just going to sit there confused about what to do next.  So, yeah, I ended up having to look up a guide to it.  I know, pretty pathetic.  Oh, well, there’s always the next island…

So, as you probably know, right now the Olympics are going on in London.  And if you’re anything like me, you’ve probably been spending most of your spare time in front of the TV watching all those amazing athletes doing amazing things.  Or sometimes amazingly stupid things.

It looks like the Creators have gotten into the Olympics, as well.  Though of course being the Creators they have to advertise Poptropica in their post about something completely different.

Stars of track and field, you are beautiful people

If you’ve got summer games fever, you’re not alone. Everyone’s excited to see the world’s greatest athletes coming together to go for the gold in some of the toughest sporting events ever devised.

I’m talking about Poptropolis Games, of course, the Poptropica Island that lets you compete for glory in a variety of track and field events. Why settle for watching other people run, jump, and throw, when you can visit Poptropica right now and be a champion in your own right? Poptropolis Games is free for everyone to play!

Well, that’s about it until next time!

I know, I know, terrible title.  Oh, well.  You’re just going to have to deal with it.  Cause I can promise you that anything else that I think of will be even more terrible.

So, it’s time to find out what yet another Creator’s favorite island/islands is/are.

The lucky Creator is none other than Shark Boy.

I love mythology and really enjoyed seeing many mythological characters come to life with a fun Poptropica twist.

This was the first Island I helped write the story for, and where Shark Boy was born.

Although not a full island, this mini-quest is a personal favorite. I was able to write the story for this one, and even though it was a short quest, we were able to pack in a bunch of fun and interesting interactive elements.

Well, none of those islands are my favorites.  I don’t dislike them or anything, but they’re just not my favorites.

What about you?  Are any of Shark Boy’s favorites your favorites?

What’s your favorite island?  Mine is either Cryptids Island or Ghost Story Island.  I love mythology and all that stuff so an island about legendary creatures was pretty cool.  And Ghost Story just had such a beautiful story.  *sniff, sniff*

Anyway, the Creators have decided that we are desperate to know what islands are their favorites.    And of course they start with Captain Crawfish.

Over the next week, we’ll be sharing the Poptropica creators’ picks for their favorite Islands. Today: Captain Crawfish.

My favorite is Red Dragon Island. I love the art for old Japan, and I especially like all the cool ninja powers you learn to use near the end. You wouldn’t expect an old sea salt with a peg leg could master the grappling hook, but I did it!

So what’s your favorite island?

Super Thunder (@IsabelleAmaya1) is the founder of Super Thunder's Blog. She loves Poptropica and all of the Poptropicans, even though she's currently in trouble and not allowed to go on her laptop.

It's a Poptropica Blog
Create a free website or blog at WordPress.com.